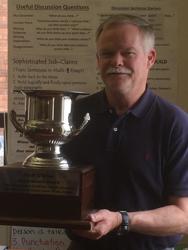 The Jack O’Brien Achievement Award is presented annually to the MCSAO member school that has the most successful athletic program. The member schools overall winning percentage will take into account both their boys and girls regular season  and post season results.  Winning this award shows an embodiment of hard work, dedication, sportsmanship, passion, and commitment to excellence in high school athletics.  This award recognizes the overall success and commitment to developing a high level of high school student athletes in all seasons.

The award is named after Jack O’Brien, Executive Director of the MCSAO from 2005 – 2014 and current Athletic Director at Prospect Hill Academy.  Jack was the founding member of the Massachusetts Charter School Basketball League (MCSBL) in 2002 which later became the MCSAO in 2005.

Member schools must participate in at least 100 contests in the MCSAO to be eligible.

*These standings will be updated at the end of each season.